Author of The Faoii Chronicles 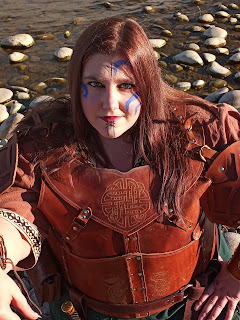 I’m currently working on polishing an omnibus for the Faoii Chronicles. It’ll be really nice to finally provide the entire series in a single ebook file for readers!

The Faoii Chronicles originally started out as a dream. I woke up one night at 2 a.m., wrote what has since become the first three chapters of book 1, and went back to sleep. The next day, the story still called to me, so I kept going. I never would have guessed in those early days how far it would go, or how many people would love it. It’s been an amazing journey.

So far I’ve mostly stuck to fantasy, but I have a science fiction short story called “Honeysuckle Sky” available that’s won several accolades. Now that the Faoii Chronicles are finished, I have a lot of freedom. I think I’ll try my hand at horror in the future.

I started out writing all the heroines that young me searched for and couldn’t find. I wanted women leading armies and wearing armor that covered all of their body parts and whose entire identity or aspirations didn’t change when they met a guy halfway through act two. And, as it turns out, I wasn’t the only person looking for that. The Faoii Chronicles offer a lot to the fantasy genre, and I’ve built an entire army of people who were looking for something worthy. 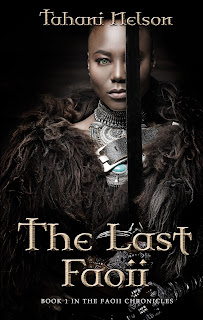 While never intentional, my readers have pointed out many times that politics and societal issues make their ways into my novels, and that the things I stand for in real life are often things that my protagonists stand for in their respective worlds. It’s never the main part of the story, and like I said, it’s never intentional, but I think the things that are important to us always bleed into the things we create, as well.

I wear armor to all of my signings, readings, and events. So even if you never read my books, chances are you’re going to remember seeing me.

Kaytalin Platt is a phenomenal fantasy author who I respect greatly. Definitely check out her series The Equitas if you haven’t already. 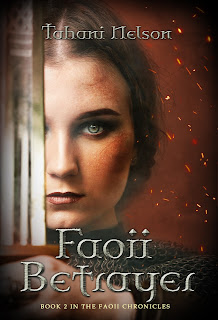 While all of the books can technically be read as standalones, I think The Last Faoii does a wonderful job of introducing the world and people of Imeriel, and the war fought there affects every other story. Also, I’ll always be a fan of reading series in order.

There have been several. I had a 1-star review go viral in a way that I never would have expected and that really put me in the front of a lot of readers. I also had an armor photoshoot go viral under similar circumstances and that gave me a chance to stand unapologetically in front of the entire world, which became the cornerstone of the Faoii brand. Also, having Sara Morsey as my audiobook narrator has opened so many doors in the audiobook community. I can’t really point to one single thing that led to my success. I’m incredibly lucky and grateful for every person or falling puzzle piece that got me this far. 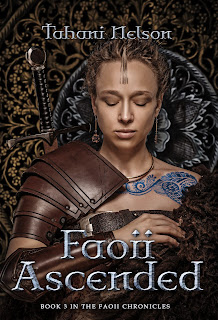 I created an entire language for the Faoii Chronicles and then only ended up using 6 words in the books themselves. I don’t regret making that decision, because it’s better for my readers overall, but sometime I wish that other language nerds would sit down with me so we can really talk about how much fun that entire project was.

I end all of my messages or posts to the Faoii Army with “Shields Up!” I don’t even really know where it started, but it’s become our battle cry. Everyone in my circles uses it now, and it really makes us feel like something real. Nothing is more inspiring than when you’re having a bad day and someone ends their message with that little “Shields Up!” we all use to support each other now.

Thanks to Tahani for participating in the interview. You can find her books on Amazon.

I am currently about a third of the way through, or less, on the final (or nearly final) edit of In Death Bedrenched. My team of Skirmishers has advanced into the fray with suggestions and criticisms that will make the book even better.