A picture is worth a thousand words, so here's a picture: 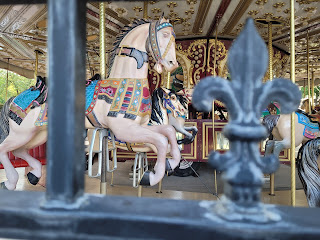 It may have nothing to do with what I'm about to write, but at least you've got the thousand words you came for.  Then again, it could have everything to do with the where this post is going. I don't know.

“When a population is dependent on a machine, they are hostages of the men who tend the machines." -- Heinlein

I'm pleased to announce that In Death Bedrenched has been thoroughly slashed, hammered, bent, welded, and formed into a presentable novella. A crack team of readers has completed the attack upon the early iteration, and it has come away stronger, faster, better than before--and it didn't cost six million dollars. I still have a cover to complete and some minor interior matters to address before it becomes available in paperback for the general public, and as a free ebook for my newsletter subscribers. The time draws near.

I'm particularly pleased with the way some of the back story developed. I wrote this prequel to the Tomahawks and Dragon Fire series primarily to address how the commander acquired his mysterious power and how Lucette came to possess the map to Cartier's cache. I got to delve into the commander's history and the native legends concerning the dragon stones. Lucette's background included more information about her father and what she did before coming to America. I enjoyed her story more, even though it's a terribly sad affair with a high body count. Of course, with a title like In Death Bedrenched, one must expect a casualty or twelve.

Lucette's method of obtaining the map challenged me. I think readers will enjoy the puzzle and chase aspect of her story. Her intelligence and courage prevail in ways that add to and are consistent with the character as she develops in the rest of the series.

The final chapter of the novella is unrelated to the immediate story of Lucette and the commander, and introduces two exciting characters of critical importance to the story. It's a teaser for the exhilarating adventure to come.

I had wanted to call the prequel "Crimson Tempest" based on a line from Shakespeare's Richard II. At least one other book had already taken that title, so I took "bedrenched" from the same line, and added the less poetic "In Death." Astute readers may note that the commander quotes other parts of that line at different times in the novella. One of my advance readers wanted to correct Shakespeare's line, but I decided to let the bard's words remain in all their iambic glory.  Another reader offered special kudos for one of the usages.

Here's the description of In Death Bedrenched:

Ulf Thorsen and Lucette Lagardere are set upon a collision course. The descendant of Viking settlers in the New World, Ulf has grasped unfettered power and found that he likes the feel of bending men to his will. His path to preeminence takes him to France in search of Cartier's map to a secret cache of power -- of magic. Lucette is a girl whose land is under attack from all sides. Her family may possess one part of a secret that could be the key to her country's deliverance. Driven from her home, she struggles to solve the mystery while fighting the English invaders. Can she find the map before the dark commander seizes it? Their journeys will leave a crimson trail across the green fields of France, and lead them in death bedrenched to the opening pages of the exciting Tomahawks and Dragon Fire series.

It is such crimson tempest should bedrehe fresh green lap of fair King Richard’s land,My stooping duty tenderly shall show.Go signify as much while here we marchUpon the grassy carpet of this plain.There were other books that had already taken that title, so