Larry and the Mascots, Cobalt Agonistes, and more 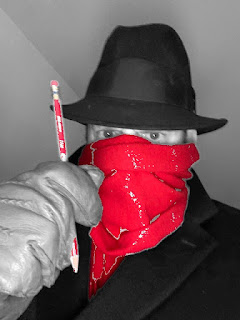 Last year I completed a mystery novel entitled McMann & Duck: Private Investigators. It takes place in 1951 in a small Texas town. As I write this I am polishing up the outline for a sequel that takes place eight years later. I became so interested in the main character, a World War II army vet, that I envisioned a series of mystery novels about him because I enjoyed his company so much, and much about him remains secret. We don’t have much in common, however, although we are both usually polite.

As to whether he will survive these books, well, that remains to be seen.

A boring meeting. I am an inveterate doodler. I doodled my way through school. I had college notebooks that looked like the walls of pyramid chamber. One day I was in a dull meeting and I started to sketch, and a man in a suit and fedora looked back at me, smoking a cigarette. By his side was a duck. I wondered who they were, and off I went. C. S. Lewis famously started Narnia with a vision of the lamppost and a faun under it in the snow, and this kind of struck me the same way.

Yes. I’ve written mostly mysteries, but also contemporary fantasy novels. Larry and the Mascots, where a college student meets a crew of living advertising mascots, and I’ve Got This, a middle-grade book about a boy with an unusual superpower, fall into that category.  Cobalt Agonistes, which is half-drama, half-comic book story, runs along those lines as well.

My two MacFinster books are comedies, but they have elements of crime fiction because crime is a great plot driver. It’s why so many of Wodehouse’s stories have (usually comical) felons about.

To my personal credit and professional detriment, I have never been able to go along with the zeitgeist. Often it’s just my own orneriness; the music I hated in college, for example, I like now, because now it is painted it over with nostalgia. On the other hand, it has saved me from following more people off intellectual and artistic cliffs. A thousand people doing a stupid thing doesn’t make it a smart thing. Doing something of worth (as I hope readers will find in my work) means I didn’t go off a cliff following the fads and formulas I see elsewhere. 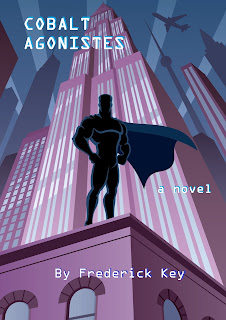 I struggled with a lot of things in my early adulthood that had to be discarded down the line—paganism, atheism, alcohol abuse. I can’t say I was born again in the common sense, only because to me that always meant a lightning-bolt like experience—if only! I still struggle with faith, because I was not raised in a religious home and it’s always a second language to me. I also think that like all Christians, the faith itself is like a second language—who wants to be humble, who wants to forgive those who hate you? I hope that my actions and thoughts are informed by my faith today.

Of course my personal experience features in one way or another in all my writing, but in a practical sense, I think my attempts at humility get me to try to be more concise. Brevity is the soul of wit, after all, and I never want to be a dull writer. The reader’s interest is paramount.

You wouldn’t know concision was important to me based on my answers to your questions, however.

Like most writers, I became a dedicated reader from childhood—big fan of comic books and the Hardy Boys mysteries, later classic pulp fiction characters like the Shadow and the Avenger—and my entire professional career came from that. I’ve worked behind the scenes for decades at book and magazine publishers. I grew up in the friendly confines of New York City—from my bedroom window I could see cars go by on the highway all day and all night. I have two enormously hairy dogs who have confounded the best vacuum cleaners money can buy. And I blog daily at vitaminfred.blogspot.com.

While I hope readers will visit my blog, I mention it here because it began as a discipline, to make sure I wrote or drew something creative every day. As they say, writers write; they don’t sit around talking about writing. Putting the onus on myself to produce something I hope people will enjoy every day, be it writing or a cartoon, is a great motivator. 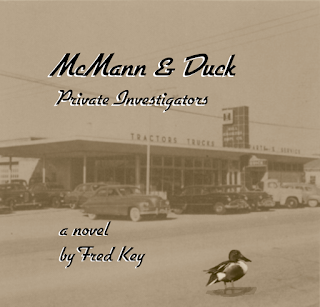 In high school I discovered a huge book of the short stories of Henry Kuttner, a science fiction writer in the 1950s who died much too young. Kuttner was incredibly inventive and prolific. There are few books I have ever enjoyed as much as that one. Science fiction dates terribly, and its stars fade quickly, which is a shame.

Like most authors, the book I think is my best is whatever I just finished. So as of today it would be McMann & Duck.

I mentioned earlier that I was a fan of the Hardy Boys books when I was a child. The first one I got was in a Christmas grab bag event, and I was hugely disappointed. Tried to swap it with something else, anything else—a Slinky, a pack of gum, whatever—but there were no takers. So one day I just sat down and read the damn thing.

It sounds stupid, but my whole love of reading, and thus wanting to write, came from that incident—that some parent was boring enough to put a book in a school gift grab bag. Go figure. 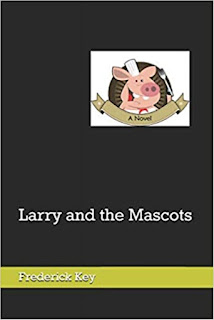 “May I pay you fifty million dollars for the rights to make your book into a movie?” would be a pretty good one. Failing that, I would like to be asked, “How much of what you write comes from reality?” because I would like to say “None of it, and all of it,” because it sounds pithy and Wildean. So no one ever asks me that.

Today it is “A proud man is always looking down on things and people; and, of course, as long as you are looking down, you cannot see something that is above you.” C. S. Lewis again.

It reminds me that pride is the king of the sins, and most to be avoided. All the other sins come from telling myself that I Know Best and I Deserve More.

If you ask me that question tomorrow, I would probably have a different quote. This is why I can never get a tattoo.

Thank you for asking me to participate in your authors’ profile series!

I can't let this pass without mention: As I write this I am polishing up the outline for a sequel that takes place eight years later. I became so interested in the main character, a World War II army vet, that I envisioned a series of mystery novels about him because I enjoyed his company so much, and much about him remains secret.

Bizarre coincidence, the protagonist in my noir detective novel SMOKE is a WWII veteran. I enjoyed writing the book because I enjoyed the character. My wife and other readers want another book featuring him and his assistant Pip. In the last few weeks I came up with scraps of his backstory about what he was doing in the war. Naturally, the character and I have some common interests, so I'll include at least one in his story -- I included this about the matter in my most recent newsletter: If the path I'm following works out, I should be able to do a series of stories about his war experiences. I'll try to outline a few different stories before I step into that harness and begin plowing lines of text.

In other writing news, I've completed In Death Bedrenched, the prequel to the Tomahawks and Dragon Fire series. A free ecopy is available here simply for signing up for my newsletter.

And also here if you prefer to checkout BookCave. 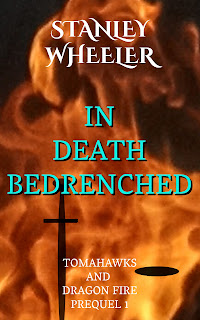 I should have the paperback available on Amazon by the end of the week.
My advance readers gave me great feedback. They really contributed to making it a better novella, and have taken it upon themselves to read on in the series. Here's what they've shared with me:
"I'm currently reading 'Threading the Rude Eye' and thoroughly enjoying it...I'm glad you chose to write 'In Death Bedrenched' as I now see how it sets the scene for the rest of your series by introducing and providing background for certain characters... I'm so loving Threading the Rude Eye that I'll have to get straight into the next one as soon as this is finished ! (How quickly can you write as once I latch on to a series I will read it all..."
"Love the Gryphon Jousting in "Power To Hurt" - fantastic!"
_________________
I had been getting the run-around on a new clutch cable for the f650. The cable was supposed to be here 2 weeks ago, allegedly coming out of California. Fortunately, the local motorcycle repair guy knew another local guy with a couple f650s who was willing to let me borrow a cable until the new one arrives. I did the temporary replacement yesterday and made a quick test drive. SWEET!
Happy Father's Day!