I've suffered from a debilitating affliction in recent times, and as a result the time I have spent writing has been limited. I'm not sure as to the cause of this disorder. One theory holds that chemicals may be the cause. Not long ago, I picked up a case of Flamin' Hot Mountain Dew. I remain ignorant of the composition of the substance within the gaudy cans, but I would wager that it consists of some chemical melange. (On a different note, don't you think melange looks like one of those names some parents create by jamming together parts of different names--like they put together Melody and Angie and came away with Melange?)

Anyway, when I cracked open the first can, a peculiar fragrance tickled my nostrils--if tickled is interpreted to include a violent thrashing with a pine bough. Nevertheless, I was intrigued. I knew this drink was not the average soft drink when I took the first mouthful.The taste was not unpleasant. I liked it. First there's the flavor, and then there is the experience. To paraphrase a certain son of Gondor, "One doesn't simply drink Flamin' Hot Mountain Dew," one must experience it.

The flavor is akin to Orange Crush with a vague suggestion of something picante. The experience arrives when the concoction contacts the back of the mouth--as it often does when one attempts to swallow the liquid mystery. The beverage washes back like a gentle, orange-flavored tide--containing a spiny sea urchin and two enraged lionfish. The urchin and lionsfish plunge their deadly weaponry into the soft and tender flesh at the rear of my mouth. The deadly attack--for it can be nothing but a violent, premeditated attack upon the most vulnerable portion of the oral cavity--compels a reaction. My reaction was a violent coughing fit which spewed dew across the expanse of my desk and beyond.

I must surmise that the chemical compound, the mysterious melange, had become a living substance and sought to escape by murdering the would-be consumer. Notwithstanding the fact that a prudent man would have ceased consumption at that point, I became more determined to prove my mastery over the liquid. The first few trials concluded in the same manner as the first. However, each time, finding that I was still alive, and that more beverage remained, I persevered. By the time the can was half-empty my fortitude began to pay off. My body had become immune to the vociferous attacks. I drank the rest of the contents with pleasure.

I presume that you can guess what I did with the rest of the cans in the case. I drank them--and bought 4 more cases. Any drink that makes me feel like I've just won a fight for survival is a winner for me. Seriously, I did. Flamin' Hot makes a great mixer with pineapple coconut Body Armor and the Exposed Aloe drink. I must admit that the three-beverage mixture lacks the deadly attack of the straight stuff, but I relish it.

So how could this duel with the Dew be the cause of my affliction? I don't know; it's just a theory. Nevertheless, the malady has motivated me to fix the dryer (twice--which is another tale), spray weeds, install a new battery in the motorcycle, change the oil, change the coolant, repair a pipe, and cut my hair--all in a window of a few days, and the account of any one of which would make for an entertaining blog post (except for the hair cut, there's no story there). I guess near-death experiences can change a person.

I expect to begin the final round of editing on In Death Bedrenched next week. I have a few super, advance readers who are finishing their editorial recommendations.

I've also had an idea that may be another novel or a series of short stories featuring the protagonist from my noir detective novel Smoke. Of course, I still have to finish book 5 in the Tomahawks and Dragon Fire series before I can start writing that one -- but that doesn't mean I can't do research for it. 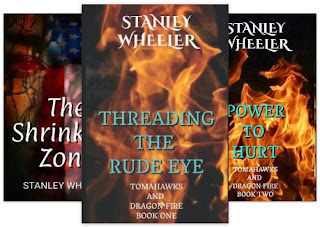