Once more it is Rescue from the Hangman's Noose as I test another variant of my skirmish game rules. More than skirmish rules, really, they have the mechanics to transition into table top rpg.

Four musketeers attempt to save a friend from the hangman's noose. Andre, D'Hubert, Arnaud, and Paul sneak into the square as the grim ceremony is set to begin. A drummer beats the solemn prelude and the musketeers linger out of sight at the edges of the square. Five of the Cardinal's Guard watch the crowd for the would-be rescuers. (I've dispensed with the crowd for my purposes today). 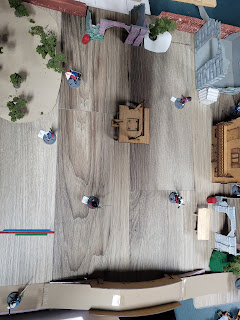 The musketeers are spotted immediately by an alert guardsman. The guards are under the command of Lt. Joubert. His four men are Rousseau, Colbert, Jarnac, and Joussac.

Hearing the guards shout a warning about the musketeers, Paul runs in from the shadows of the auberge to take Joussac, who is waiting for the hangman and prisoner to emerge from the cells, and runs him through. (The green markers denote hidden items the musketeers can use but which were not significant factors to play as the circumstances developed). D'Hubert has come around the other side of the auberge. 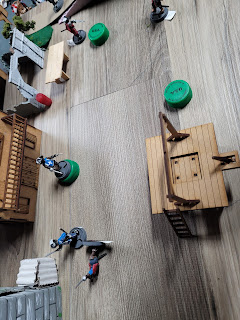 Meanwhile (not pictured), Arnaud rushed the guard Rousseau. They exchanged blood samples and Arnaud retreated to check the depth of his wound. 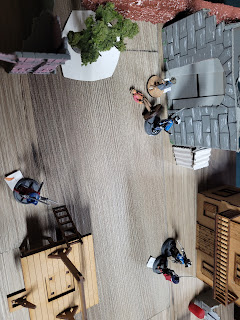 In his rush to delay the guards from hindering Paul's rescue attempt, Andre leaps upon the table, only to have the unstable furniture tilt as his feet come down upon the edge. The table tips to spill Andre to the ground. Fortunately for him, the guards are focused on the the prisoner and are unable to take advantage of his temporary vulnerability. 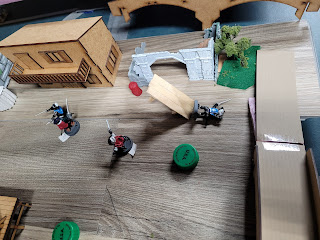 Arnaud discovers that his wound is, in fact, but a flesh wound, and he launches himself at the guard Jarnac. In a brief flash of steel accompanied by remarks about lineal irregularities, Jarnac falls with a mortal wound. 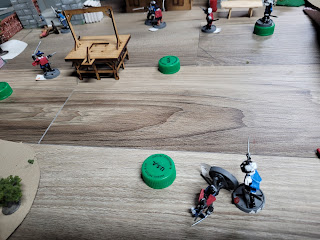 Joubert, seeing the hangman down and a musketeer about to seize the prisoner, realizes that desperate measures are required. He raises his pistol and fires at Paul.  A puff of smoke rises from the flintlock and the ball smashes against the stone of the prison wall. Joubert follows the shot by rushing Paul. 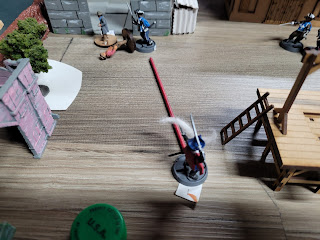 Paul begins his escape with the prisoner before Joubert can stop him. D'Hubert measures swords with Rousseau. The latter comes up lacking, with the result that he measures his length upon the square. The musketeers have slain a third guard. 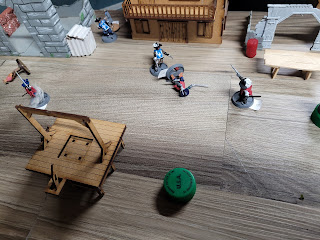 Even with three of their number stretched upon stones, the two remaining guards keep their heads. Before Paul can escape with the prisoner, Colbert fires his pistol at Paul. Although his lead message doesn't strike the rescuer, Paul does leap for cover, abandoning the prisoner. 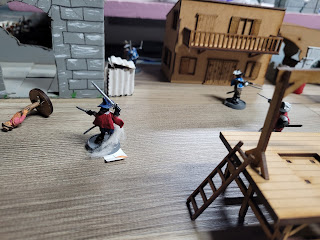 The guards find both courage and will. Joubert sprints in to grab the prisoner and drag him back to the hangman, who has regained his senses. They have a resurgence of hope--which D'Hubert punctures, along with Colbert's innards. The badly wounded guard drops to the cobblestones with a bellyache that obliterates his ability to take part in any further festivities. 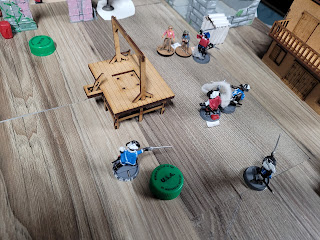 Joubert and the hangman don't get far with the prisoner. Paul breaks from cover to engage Joubert in a vigorous philosophical discussion with an emphasis on being or not being and the utility of cold steel in providing an answer to the query. Joubert becomes converted to Paul's point of view, first falling as the argument penetrates his flesh, and then fleeing with the burden of his new found wisdom. 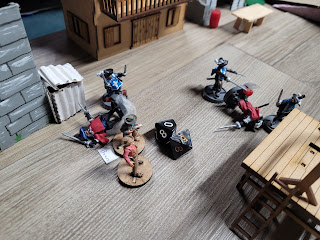 With Joubert converted and Colbert stewing in his own juices, no guards remain to impede the rescue. 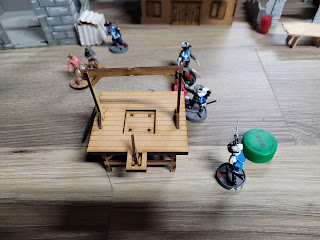 Overall, it was a great game. I was surprised that the musketeers took only a single wound while killing three guards, putting one hors de combat, and having the fifth flee the field. Andre never even got into the fight (if you don't count his duel with the table). As usual, I like the changes I've made to the system. I'll have to see how it goes with more advanced scenarios. I anticipate the Rescue in the Ruins next. As far as this scenario goes, it could be made more interesting with the addition of replacement guards entering on the next change of initiative after the death of any guard. Adjusting the random starting positions of the musketeers so that none of them enter so close to the prison might be a simpler alternative.