AAR of Wreck at the Ruins

Sing, O Muse, of the race among the ruins, when the princess fled from her crashed flyer to fall insensible as she hid from the green men of Mars. Rehearse for us the exploits of those noble red warriors of Melihum as they spilled their blood over the golden ochre of the dead city where the princess lay. Tell their names and the weapons they bore. Describe the mighty foe and lament the warriors they laid low.

The warriors were true and brave. Nantos Nan (NN), veteran of many battles and sound in mind and deed, did lead them. He bore the bright sword given him by the Jeddak of Melihum, with his short sword and pistol he faced the enemy. He had with him Han Tadron (HT1), who slew many green enemies in his day and wore a warriors metal. Dav Ravo (DR) of the straight-shooting pistol and gleaming sword came to make his name known. Mardos Tors (MT) the fearless and valiant completed their number, bearing his gleaming blade and shortsword with a shooting weapon on his hip. Han Tadron the second (HT2) had lagged behind, but joined the warriors when Han Tadron was slain.

Their foes were arrayed in the metal of warriors slain, and casting long shadows--for they were three times the height of a man--their four arms were quick with sword and pistol. First came Vak Voka (VV), renowned among the green Zarhoons for his prowess and cruelty. He was the one who had fired the shot that disabled the princess' flyer. At his side marched Bak Badja (BB), the bold attacker. 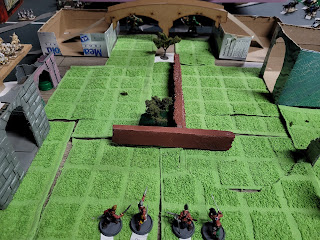 Tell us who drew first blood? It was the green man Bak Badja who drew first blood. His radium pistol shot true, taking Han Tadron at the base of throat, in the little divot where the clavicles join the sternum. The exploding shell left him no chance at life and his blood first stained the ochre moss. 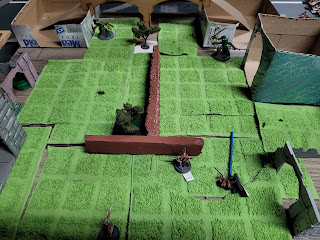 Nantos Nan took aim to repay BB for the deadly shot but his bullet exploded against the wall upon which the ancients had written, "Nutritional Facts." 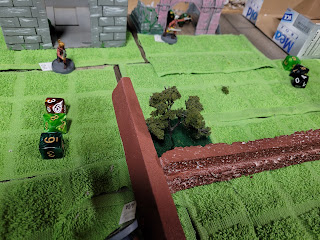 BB, unfazed by NN's shot, returned fire to graze NN's shoulder and caused him to take shelter behind the wall. Vak Voka looked also for the princess. In a ruin with pink upon the walls, he found a trap which dropped him to the pits. He spent many long efforts in trying to escape from the trap.
Sing, O Muse, of Dav Ravos's fate. Tell how he hurried in his search. He thrust his golden helm within a ruin's walls only to meet a great pale simian. DR, swift of hand and mind, drew his pistol and fired in surprise. His bullet went true, but the white monster shrugged off the wound and came on the attack. 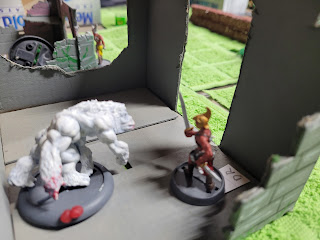 The pale brute of savage will and brutal power struck him a blow that crushed one shoulder. DR fled from the ruin with the speed of the zephyr but the angry ape bounded after, bent on pounding the intruder into dust. NN and HT2 traded shots with BB. The fierce fire drove the green man into an ornately decorated building, but not before he had wounded NN once more. Inside, BB found the unconscious princess. He threw her over a shoulder and ran out, knowing that the Melihum warriors would not dare to fire for fear of injuring the princess. 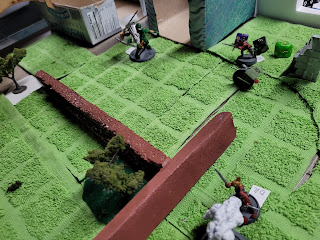 HT2, a flame of chaste and loyal passion burning in his heart for the princess, rushed to BB as though on a chariot of the gods. With sword drawn he engaged the verdant giant. 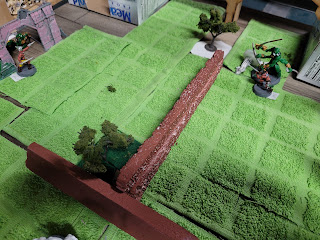 BB released the insensible princess and raised his flashing blades. His steel clove HT2's shoulder, the blade cutting down into the upper ribs. HT2 dropped to his knees, and BB pulled the sword from the wound, which gushed with the warrior's fresh dark blood. Although not slain, HT2 fell to the side, blackest night enveloping his consciousness. BB lifted the princess from the ochre moss as MT drew near. 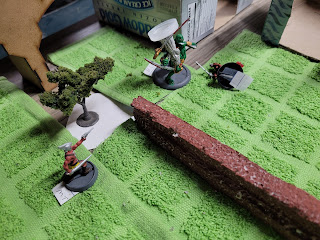 But what of DR and his unlucky fate? He turned to fight the mighty ape, and dealt it another wound, his quick blade darting between the beast's four deadly arms. The wound did not stay the white simian. With thews rippling like an angry sea, the pale ape crashed a massive paw against DR's golden helm. The brave warrior fell, not dead, but unable to move. 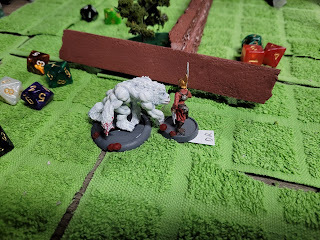 How did MT bring honor to his name? The valiant warrior MT was set upon by VV, mightiest of the two green men, and who had finally escaped the pit. MT gave as good as he got, wounding the green man and taking a small hurt of his own. When he saw that BB had taken up the princess again, he broke away from VV and leaped the wall to rush upon BB like a banth defending its kill. MT brought up his best trick of swordplay to drive his blade through BB's dark heart. At last, the life fluid of a green man dampened the golden ochre not far from HT2's unconscious form. 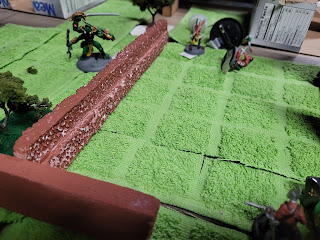 How did MT meet his end? VV bounded over the wall in a single stride, like a nimble thoat clearing a low fence. The cruel green man struck from behind. MT turned to meet the attack. NN, twice wounded by BB's bullets, surged forward to aid MT and to rescue his princess. 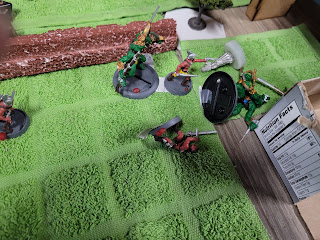 MT had exhausted all of his tricks of swordplay, and NN, slowed by his wounds, could but watch as VV's whirling blades cut down his comrade. MT dropped upon the ochre yet wet with BB's warm blood. As the warrior expired, he rolled to place his body between VV and the princess. 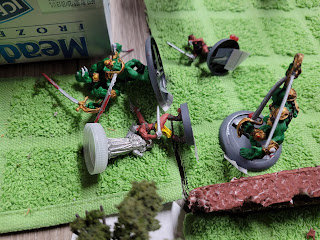 Did DR recover from the blow that sent him low, with darkness closing in? DR could not escape his fate. Clobbered to the turf by the hand of the pale ape, DR's living body could not respond to his danger. The white simian dragged the miserable man back to his lair to feast upon the human flesh. 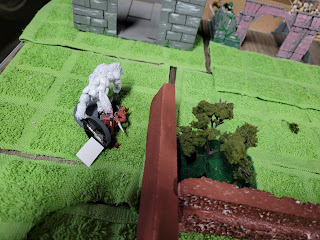 What of NN? Did he succeed in saving the princess? O how the sorrow of Melihum was magnified on that day. NN, last of the Melihum warriors still treading upon the ochre, sprang forward as VV took up the beautiful princess. Cover your ears and steel your hearts for the sad end draws near. Without even lowering the princess once more, VV parried NN's desperate blow, and drove his sword through the red man's core. Weep, Melihum, weep for sorrow and remorse. The cruel VV carried away the princess to shriek beneath the tortures that would make the green men laugh with delight. 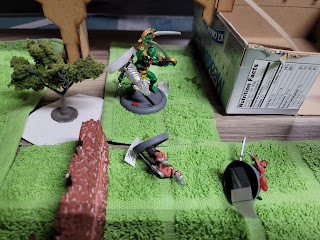 _________
Was the play test fabulous? Indeed it was. Combat, shooting, movement, etc went tremendously well. I believe it's time to move on to a scenario from the Kru War. I doubt that Homer will be joining us for that report.
Posted by Stanley at 7:07 PM