First, the vest I ordered for my role in the murder/mystery dinner in two weeks arrived. Unfortunately, the manufacturer is under the impression that I should be shaped like a snow cone cup. So that will have to be altered.

Second, I finished writing the last chapter of Truth in Flames. It weighs in at over 95K words--more if I add an epilogue. It's quite a fabulous finish, if I do say so my self--but others will say the same once they've read it. Which reminds me. I should upload the chapter to my Skirmish Team for feedback and editing.

Third, I spoke in church today (I know today is the start of a new week and therefore not part of the same week we just completed, but my license to exaggerate is still valid in all 50 states) and there were no casualties. Most of the talk came from my daughter's experiences in East Texas where she's currently serving as a missionary. She had some nice stories to go with my theme of Blood, Sweat, Toil, and Tears.

While looking for something else, I found this mind map of some of my original thoughts for the Tomahawks and Dragon Fire Series. I included a screenshot of the character section to illustrate how things changed from conception to execution. I used this mind map program back when I first conceived the idea for the series, but hadn't used it since--until Truth in Flames. 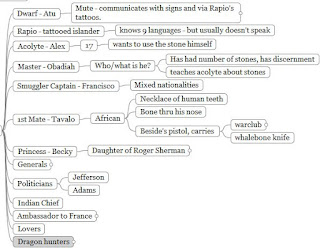 It looks like Alex is the only fictional character who came through from the original brainstorming to the actual writing substantially unchanged. Atu was the name I had originally selected for the character who became Iago, and I transferred the Atu name to the islander. Tavalo would've been a fun character, but I radically changed both Francisco and Tavalo and they became Captain Rip and Antonio. The latter is an extremely fun character, a charming rogue, that a beta reader has singled out for special praise. Rip is ripe for the revelation of his backstory--it could happen in book six. I think the historical Becky Sherman turned out to be too young for the purposes I had in mind for the story--and thus was transformed into Lucette, the French freedom fighter. The dragon hunters were originally supposed to be Russians in the employ of the Russian Prince. Like everything else, they become something completely different. I have to admit that I do wonder how the story would've gone had I used those original character ideas.

I've included a mind map of a section of Truth in Flames in my newsletter. Click the button at the top of the page to subscribe.

Email ThisBlogThis!Share to TwitterShare to FacebookShare to Pinterest
Labels: Truths in Flame, Writing