I recently came into possession of something unusual. At least I've never seen anything like it before. 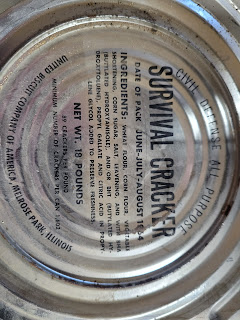 I note that it says "Survival Cracker" not "...Crackers" -- At 18 pounds, I'm wondering if I can get the cracker out of the can. I don't see a "best used by" date, but it was sealed in mid 1964. The contents are older than most of the people with whom I associate. I should work this object and the mystery contents into a story.

Until I feel inclined to create such a story, enjoy the excerpt below from the rough draft of In Death Bedrenched, the prequel to Tomahawks and Dragon Fire series. The prequel shows how Lucette obtained the map, how the commander obtained his dragon stone, and how they both got to the opening of Threading the Rude Eye.

“Tell me about this cache,” Gavrel broke in. “We don’t need a lesson in geography, war, or troop strengths. We need a weapon. If we cannot stand against this mysterious commander the English have sent, we will be destroyed, sooner rather than later. Does the cache exist?”

Another man echoed, “Does it exist?”

Amid a ripple of murmurs, all eyes turned to Dampierre.

He said, “To come to a point, I don’t know. Both Chevalier Lagardere and I have ancestors who sailed with Cartier. It was rumored that he had a map to this cache of treasure, of power, of—dare I say—magic. He left something with my ancestor. I have found it among my ancestor’s prized possessions which have been handed down for the generations which separate us. I hold it here.”

Dampierre held up a small oval object. It was flat, black, and pointed on both ends. “I find nothing written upon it. His papers made reference to it only as something which Cartier felt significant. What, precisely, warranted this significance, I have been unable to determine. You may examine it for yourselves.”

Dampierre passed the stone to the gentleman at his right. Each man took the object, examining it and passing it on as Dampierre continued.

“Although my ancestor neglected to elaborate upon the significance of this small stone, he did leave a writing with regard to the cache.”

The complete first chapter is available to my newsletter subscribers in the next letter. Click the newsletter tab at the top of the page to signup.