Author of The Traveler's Journal Series 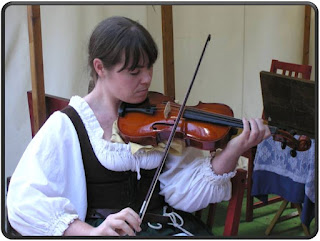 I’m writing an epic fantasy series set in an alternate history universe where magic is not only real but as pervasive as technology is in our world.

Actually, the story takes place in a whole series of alternate versions Earth strung together in what my main character, Danny, calls the Related Worlds.  She’s writing to Alice, who lives in our world, telling her all about her life as a Conduit, an individual with great capacity and affinity for magic that the rest of society uses to increase their own power – a kind of human familiar.

The first book in the series was about how Danny managed to liberate herself from her very powerful family who were exploiting her terribly.  My second book, which I am about to release, is about her struggles to find a new home for herself and a base of operations as she sets out to free others like herself.  This second book was a lot of fun for me to write because I got to introduce everyone to the circus and all of the cool people who call that town-on-the-rails home.  This is the book where Danny really gets to start spreading her wings (figuratively and literally) to see just what she’s truly capable of

It’s more accurate to say that Ursula K. Le Guin’s story, The Ones Who Walk Away from Omelas, gave me a better grasp of the kind of story I was trying to tell.  I already knew Danny was going to be the kind of character others with few scruples would seek to exploit, but when my friend told me the story of Omelas, I could better articulate the moral I wanted readers to take away after reading Danny’s story.

At this time, I am focused on my fantasy series, but I once had a teacher in high school who said that if you studied history, you could study any other subject under the sun.  I would say something similar about fantasy.

When you write fantasy, you can literally write every other genre out there under the same umbrella.  You can write a thriller, a mystery, a horror, a romance, historical fiction, western, you name it, and with a little magic cast about to smooth over any logistical or probability wrinkles you have an awesome fantasy story.  You can even have a book with a ton of science in it and still throw in a dash of magic, because in my opinion the two don’t cancel each other out and the magic helps fill in the chinks technology leaves in the plot.

For instance, slapping a pair of wings on a human with a little ingenuity in a geneticist’s lab won’t make a girl and her friends capable of flying, but if you mix in a pound of magic, it’s no longer impossible to believe they can hide huge wings inside skin pouches on their backs.  This is probably the biggest reason I love fantasy over all of the other genres.  I have a much easier time of suspending my sense of disbelief so that I can properly enjoy the story’s narrative. 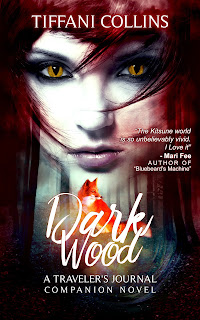 Hmm, well, I’d like to think that I’m traveling the road less traveled with my books in that several of my principal characters are people who have already come into their own and are dealing with the kinds of issues that are unique to powerful people.  Often, fiction stories are about underdogs or those who came from nothing and set on a hero’s epic journey that ends with them reaching legendary status.  I want to explore the stories of those who are already legendary.  What must it be like to have oodles of power but find yourself in situations where to take action would only cause greater problems?  Or to be in a position where all of your power is for naught and you have to rely in other skills you’ve never needed before because you had power from the beginning?  I want to play with characters who are some of the best at what they do and watch them do it with style and competence.

I’m not saying these are new concepts.  Far from it.  I can give several examples of these kinds of characters and stories, but not so many that I would say they represent the majority or even large minority of stories out there.  So, I think for readers out there who like strong, competent, capable, clever characters, I can add a few more stories to the collection along with my own twists and ideas on them.

I also think I will stand out from most other stories out there because my main characters are asexual.  It’s not that I set out specifically to write novels that represent people like me, but to have characters wholly unconcerned with sexual attraction will offer a glimpse into the head od someone who wouldn’t even know how to begin using sexual appeal to get what they want, and is probably the least likely to fall for the wiles of those who do.  My stories have no real explicit focus on sexual orientation, but at the same time, I don’t think the vast majority of people consider how many of their day-to-day decisions revolve around and are shaped by the desire for romantic relationships.  For an asexual character, a lot of the reasons people do what they do or find themselves in all the drama and complicated relationships they do make absolutely no sense!  I’m taking the opportunity self-publishing offers to provide a viewpoint few novels let people see.

If I had to pick one thing—no wait, two things—that manifest in how I’ve developed my characters and their stories, I would have to say that I’ve projected my… determined independence… onto my characters.  Though I’m sure my friends and family would say another way to describe this is just plain stubborn contrariness.  The second thing that I’ve passed on is a kind of gallows humor positivity.  No matter how atrocious the situation seems, we can do this!  Yeah, it really, really, really sucks, but we WILL survive it and then we’ll have a great story to tell everyone about how we’re never doing it again!

That unless I die, I WILL complete this series and not leave everyone hanging, because I can’t stand it when a story stops on a cliffhanger or uncertain ending.  I promise that I will not get bored and move on to a shiny new project or chicken out when things get complicated.  I don’t even have to worry that some publisher’s editor pulling the plug on my series or that Amazon topples.  I believe in keeping my options open and not putting all of my eggs in one basket.  I have a do or die attitude when it comes to finishing what I start and a better late than never philosophy when it comes to life’s curveballs causing me delays.  Don’t worry readers, I won’t leave you hanging! 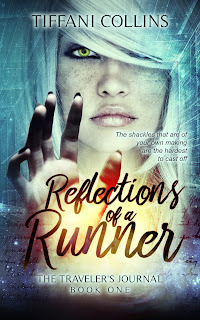 I love how this question implies that I consider my books underrate and that more people should read my stuff!  *G*  Never mind that it’s true!

But in all seriousness, I really do believe that S. A. Swiniarski is a deeply underrated author.  He wrote some of the greatest horror books I’ve ever read and one of his books, Raven, had a huge impact on my reading tastes and how I approach popular myths and legends in my own stories.  And yet I would be willing to bet my whole savings account that no one who reads this interview has ever heard of him.  It’s one of the greatest literary tragedies of our time!

The first books in my series The Traveler’s Journal series, Reflections of a Runner.  I really love Nící and my Kitsüns, but if readers start with RoaR, and then get to the second book in the series they get to meet Nící and her crew in Reflections of a Tigress.  After that, if they want to know more about Nící’s past exploits, they can pick up Dark Wood, which I’ve tied to the series as a companion novel.

Honestly, I’d say that I’m still waiting for a break that launches my career.  I’ve been told again and again that my novels are good, so I don’t doubt my writing ability, but man, discoverability is a real challenge!

That said, I’ve actually really benefited by getting my books into the local libraries.  I’ve gotten sales I otherwise wouldn’t have by having my novels available for free in libraries.  A patron went out of their way to leave a note with my coworkers to tell me that she got halfway through my book and new she was going to want to read it again, so she bought a copy for herself—then a second copy for her daughter because she knew she would love it.

I’m not too embarrassed to admit I nearly framed that yellow sticky-note! 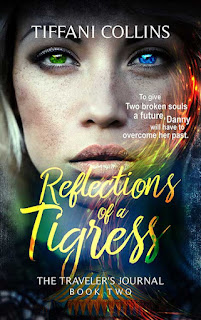 “So, have you ever read Harry Dresden?!?”

I am a shameless fangirl of the Dresden Files by Jim Butcher and will joyously geek out with other obsessive Dresden nerds all day long.  Normally, I’m the one asking that question, so it would be fabulous if I met someone who blurted it out before I did.  That way, we could skip the descriptive introduction and get straight to placing bets on what all of Butcher’s dropped hints mean and what is coming next in the series.

Ooooo!  I love quotes!  There’re so many!  I could go on and on about all the quotes I love, but because this is an author’s interview, I’ll go with the quote pertaining to writers that always makes me grin and which pretty much sums up my whole philosophy and approach to the storytelling art.

“Good writers borrow from other writers.  Great writers steal from them outright.”

Which is funny, because he was robbing T. S. Elliot blind, who said “Good writers borrow, great writers steal.”

Thanks to Tiffani for participating.

In my own writing this week (I'm working on a free prequel to my Tomahawks and Dragon Fire series), I've been telling the story of two prominent characters. I'm going to include an Interlude between the commander's backstory, and Lucette's adventure. The latter brings both characters to the opening of Book One of the series. The Interlude will feature a particularly cruel and colorful dragon who doesn't join the main adventure until Book Two in the series. Except for the Interlude, the prequel is almost complete.