Uhura turned in her chair to better address the captain. "Distress call, sir. It's Klingon. They report that they have been seized by a beam from planet Cestus VI. Their ship is breaking up."

"I'm not picking up any responses to the distress signal, Klingon or otherwise," Uhura said.

The distress signal ended abruptly. Scanners located debris in orbit. Spock indicated that the debris was consistent with that of a Klingon battle cruiser. Immediately thereafter, the Enterprise was seized in a tractor beam from the surface. Kirk and a landing party beamed down to the surface of the class M planet to check out the source of the tractor beam.

If the power source is not disabled, the Enterprise will be destroyed by the power of the tractor beam.

When Kirk, Scotty, McCoy, and Chekov materialize, they find that their weapons, tricorder, and communicators have issues. None of the communicators work. Only Chekov’s phaser works. The tricorder does not work.

Also on the surface is a party of Klingons who were stranded when they beamed down before their ship was destroyed in a tractor beam. When they see the Enterprise crew, they believe the Enterprise destroyed their ship with some Federation secret weapon. The Klingon equipment also has  problems. Only one of the disruptors is working. They are led by Captain Kor.

Both Klingons and Federation teams begin searching the ruins. Six, low buildings in various states of disrepair surround a large square. A line of pillars runs down the center of the square. Two large patches of brush and low trees have also grown up in the square.

Chekov runs across the broad square toward a taller building with weird designs around the doorway. Kirk moves into the closest building where he locates a piece of alien technology which shocks him and knocks him out when he touches it. Scotty has gone to the next building beyond Kirk. McCoy goes in to help Kirk.

Meanwhile Klingons crewmen entered two buildings. One of the buildings had a pair of swords which were seized. Kor saw Chekov and Scotty. He had his man with the working disruptor toss it to him. Scotty sees Kor but is distracted by something in the building. While Scotty hesitates, Kor scores a direct hit, killing the engineer.

Things don't look good for the Enterprise. The pressure on the hull is increasing, and Uhura lost contact with the landing party as soon as they beamed down. 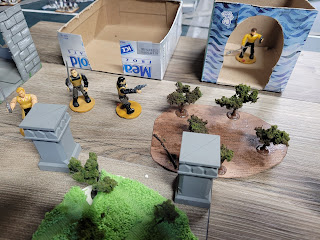 McCoy revives Kirk. The determined captain rushes out to see Kor firing at Chekov. He isn't close enough to speak to Kor, but he does yell at him. Kor responds via distruptor and Kirk adds a minor wound from the disruptor graze. Kirk takes cover inside the building to discover Scotty's dead body and a wall of strange designs with a board of buttons, lights and controls. Writing in an unknown script is scattered about the control board and wall. Chekov takes out one Klingon. He and Kor trade shots; each takes a light wound. Chekov is cornered. McCoy is trying to get his tricorder to work. (That figure on the far left that looks like Mirror Universe Kirk with a sword is actually a Klingon suffering from a wardrobe malfunction). 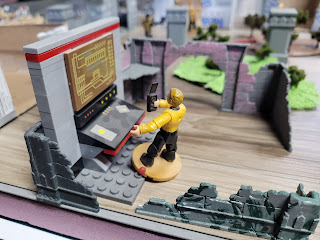 While Chekov ducks back inside the building across the square to avoid Kor's distruptor fire, Kirk begins working the alien board. He's trying to make sense of the controls, to find a pattern, a clue to deactivating the destructive beam that holds Enterprise.
Chekov peeks around the corner. He exchanges shots with the Klingon captain, wounding Kor a second time, and driving him into cover.
Kirk thinks he has it figured out, but a Klingon with a sword is rushing toward his location. If Kirk gets interrupted, he'll have to start all over. The Enterprise may not have time for Kirk to begin the deactivation process anew. 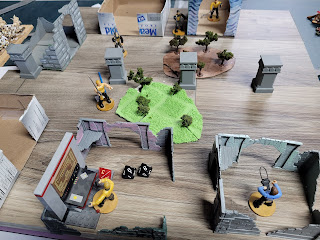 In the nick of time, (a really big nick, actually) Kirk completes the sequence before the Klingon attacker arrives. The communications are no longer jammed. He signals the ship to have them lock onto the himself and Scotty, as well as Chekov and McCoy.
The game play was very smooth. It gave a great sense of action happening all over and very rapidly. If this was an episode, it would've only been a few minutes long, excluding the hook. Ideally, Kirk would have tried to convince Kor that they needed to work together. Kor saw the Enterprise crew before they saw the Klingons, and Kor's proclivity for shooting first and getting details later deprived Kirk of an opportunity to close to diplomacy distance to try his persuasive abilities. Chekov wasn't about to opt for an attempt at diplomacy while Kor was following Klingon policy of negotiating from a position strength--over the dead bodies of his perceived enemies.
The Enterprise was set to go all tin can beneath the semi-truck tire when the damaged/timer reached 100. Kirk deactivated the beam at 68, so there were a few turns left.
Interesting side note both casualties were redshirts: Scotty, and the Klingon who was being played by an unnamed redshirt because of a lack of Klingon figures for the game.
________________________
The Tomahawks and Dragon Fire prequel--which may be called Crimson Tempest, or not--advanced significantly this week. I had hoped to finish by the end of March, but the new target for completion is the end of April. Leave me a note if you're interested in being an advance reader.