The Corsican Brothers were here at the Chateau du Chat Gris for Thanksgiving. The K-man got to help light (reluctantly) the final batch of coals I used to finish off the turkey. The bird turned out great, by the way, with a light smoke and orange flavor. It may have been as good as the turkey I smoked last year.

Following the gratitudinal repast, the four-wheeler refused all entreaties. It could not be persuaded, cajoled, or prodded into service. Instead, we enjoyed a rousing game that I made up on the spot. RC wanted to play a game with the Star Trek figures, and K-man manifested boundless enthusiasm for the idea as well. With five figures, a hunk of rigid insulation for a game board, homemade scenery and obstacles that consisted of a ruin, a big rock (played by an actual rock) a few trees and a wooded area, and the Guardian portal from The City on the Edge of Forever which came with some of the figures, along with several six-sided dice, some bottle caps and red wax, we sat down to the table to play. I should say that I sat down. The boys remained standing, moving about, and hopping with excitement.

The visiting team included both Federation and Klingon crewmen. The home team consisted of two carnivorous dinosaurs, and a giant spider. It seems that the joint mission of frequent enemies had troubles with their small craft and had to land to effectuate repairs. While working to fix the problem, one crewman was bitten by a venomous creature. The venom didn't kill him, but sent him into a delirium and he leaped through the strange stone portal with a crucial part of the vessel. The rest of the team followed to find themselves in a strange new environment. Their mission required the crew to find the missing part, and to rescue the crewman who had gone unconscious, all while avoiding the unfriendly denizens who sought to make a meal of them.

The game was complicated by the fact that RC insisted on adding more monsters/plot complications, and also a creature that wandered about according to his desires dispensing unsolicited healing. The Corsican Brothers had their men spread out for a more effective search. One Klingon bravely faced off with a dinosaur--and finished the game right there as a terrible lizard lunchable.

One crewman took a wound in battle with a dinosaur; he escaped. Another red shirt made the dinner menu for a dinosaur, but the remaining crew escaped with the missing part and the passed-out crewman. A late arrival (one of RC's plot complications) tested his phaser on a dinosaur and found the results entirely satisfactory. I think the fact that most of the Star Trek figures were from the "Day of the Dove" episode, and carried swords rather than phasers or disruptors, is why the Corsican Brothers didn't think to try ranged weapons before they had already fed two comrades to the beasts. The giant spider did get in on the action, but neither took nor delivered any wounds.

In short, the Corsican Brothers and I had a great time with our little game. The chance to take a second or third action tempted the boys early in the game, but they began to see that the gamble usually brought unfavorable results. They stopped taking the gamble until the race to the portal at the end. After some close calls and frustrating die rolls, the K-man made it to safety with the crucial part, and RC carried off the unconscious crewman.

In other news, I'm working on the cover for The Shrinking Zone. Here are two possibilities for your consideration. I'm probably going to explore more font/color options for the title. 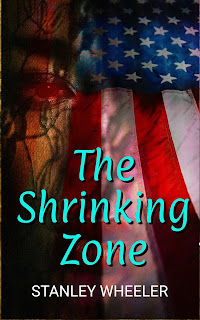 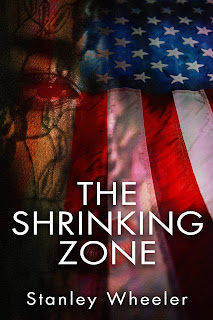 Let me know if you think one is more appealing than the other for a novel categorized as a dystopian domestic thriller. It's a fanfare for the common man featuring action and adventure in a dystopian setting.
Here are some quotes I've included in the Author Foreword of the novel:

“May the Freedom and Independency of America endure until the Sun grows dim with age, and this Earth returns to Chaos.” –Toast given at a Massachusetts tavern in 1776 following the reading of the Declaration of Independence

“Show me that age and country where the rights and liberties of the people were placed on the sole chance of their rulers being good men, without a consequent loss of liberty?” –Patrick Henry

“They tell us, sir, that we are weak; unable to cope with so formidable an adversary. But when shall we be stronger? Will it be the next week, or the next year? Will it be when we are totally disarmed, and when a British guard shall be stationed in every house? Shall we gather strength by irresolution and inaction? Shall we acquire the means of effectual resistance by lying supinely on our backs and hugging the delusive phantom of hope, until our enemies shall have bound us hand and foot? Sir, we are not weak if we make a proper use of those means which the God of nature hath placed in our power.” –Patrick Henry

Get your copy of The Shrinking Zone in December.