Links to my books are above.

Author of The Voice That Thunders Series 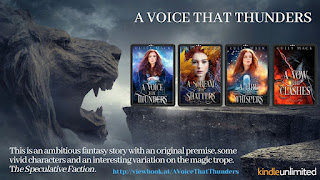 I’m over halfway through writing my Voice That Thunders Series and currently I’m writing book five. The series features siblings, Mirah and Gabe, who become central characters along with a band of rebels fighting against immortals conquering their realm. Think epic battles with Immortals and beasts of all kinds, throw in elemental magic, huge plot twists, portals and unique worlds, and an ever-growing number of characters trying to save their world. If you love character-driven fantasy, you'll love my books. I warn you now; I don't go easy on them.

I have a fascination for mythology. The older the better. My primary sources are from myths from Mesopotamia. Most people have never heard of them. This is because, until around 150 years ago, the cuneiform tablets detailing their accounts was undecipherable. Mesopotamia is otherwise known as the birthplace of civilisation and its historical setting is in the ancient near east. Differing cultures lived in proximity, so there is a blending of myths and traditions. I mainly draw from the Sumerians, the Akkadians, the Semites and the Babylonians.

YA readers may have heard the term Nephilim from Cassandra Clare’s series or watching Supernatural among other popular sources. Most modern Nephilim depictions are drawn from Semite sources such as the Book of Enoch, where they are portrayed in an urban setting and regarded as fallen angel/human hybrids. As interesting as this is, the Semite account is only one version of the mythos.

Mesopotamian texts differ on many topics. For example, creation epics, deity names and culture heroes. But they agree on one thing… the gods came, slept with human women, and created giant hybrid offspring. Yes, those Titans, gods and beastly monsters from Greek, Roman and biblical myths were known to older civilizations! Some saw these gods in a positive light, others as negative. It makes for great conflict. I wanted to create a work more aligned with the earliest accounts of this mythos.

I’m not afraid to write what the story needs. In places, it’s dark (but not grimdark). People die! The battles are intense, blending weapons, magic and intelligence. No one is safe! I’ve got messages from fans to prove it. I always tell them the same, trust me, keep reading. The monsters are unique. Ever heard of Dactyrs or Dagani? The cast is huge, with two or three plot arcs often running parallel, and narrated from multiple pov’s. I’m a discovery writer, so the edge of your seat plot twists in unexpected ways. You’ll find romance and broken hearts (sorry). Even so, romance isn’t the main plot. I’ve been told many times that my writing is very visual and how reading my books is like watching a movie. I’ll let you be the judge of that… 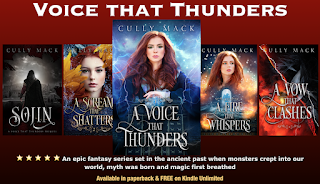 For many years, I worked with people who were the most broken, those experiencing homelessness, isolation, trauma, and addictions. My characters tend to go down similar paths, and even though their journey darkens, in one form or another, it becomes a redemptive arc, finding themselves, who they truly are, kind of thing. I’m an advocate for nothing and no one can break me unless I give them the power to do it. So, yes, I test my characters to the point of shattering, and watch them rise from their brokenness into who they were meant to be.

I’m on most social media

Shawn Dressler’s A Tale of Cloak and Shadows. This was a new author for me. The prose is poetic, and the world is painted with vivid imagery. The way Galindel switches back and forth from the present to his memories is enchanting and intriguing. It’s not technically a novel, more of a prequel to the Kingdoms of Core series. Everything about it feels so alive and made for intense reading. The world building, characterization and dialogue were all spot on. An author to try out for sure.

I’d recommend book three, A Fire That Whispers. But to get there, you’d need to read the first two books in my series. Why book three? My writing is stronger. What I loved most about writing this book, is how the two main characters are trying to discover the truth but are unable to discuss and compare their findings. Nothing is as it seems. I drop hints and foreshadow the plot. There are some huge plot twists! Other characters who know the truth are possibly lying. Even I didn’t know how it was going to play out until the latter part of the book. The reader learns the truth as the characters do, because that’s how it was revealed to me. This is the beauty of discovery writing. 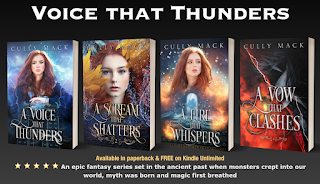 I had the opportunity to return to university to study English Literature and Creative Writing. As a mature student, I had a blast. I stayed on and completed my Master’s in Creative Writing.

How can I join your mailing list? The best way to do this is to sign up for Sojin. A free prequel featuring Ammo and Sojin, two side characters in the Voice that Thunders series. It can be read at any point in the series.  https://BookHip.com/QVLCRL

“It is the mark of an educated mind to be able to entertain a thought without accepting it.” Aristotle, Metaphysics 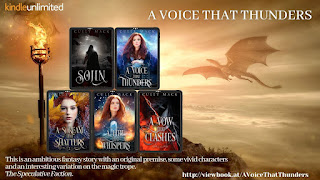 ______________________________
Thanks to Cully for participating in the interview.
I had a great time writing this week. I did miss one day, but I made it up the next day. I'm on the home stretch in writing the dystopian thriller. It's an action adventure novel set in the near future--like the week after next--and it's a fun ride. Abductions, rescues, surveillance drones, government agents, farms attacked by gangs of drugged convicts, secret government experiments, oppressive government interference, conspiracies, plot twists, and unstoppable action are yours in The Shrinking Zone by Stanley Wheeler. Until that one is ready, I invite you to read my flintlock fantasy series in which the American Revolution, magic, and dragons collide. The series begins with THREADING THE RUDE EYE.
Sign up for my monthly newsletter here.
Posted by Stanley at 5:22 PM