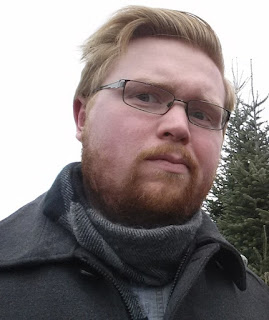 I quite literally just finished up the final revisions on my second book, Revelations, and sent it out to my copyeditor. It’s the sequel to my debut novel, Archangel, and the second of six books in my Shadow’s Advent series. In Archangel, the angel Uriel descends to an Earth that is now ruled by demons. It’s been ten years since the war between Heaven and Hell began, and Hell lost.

After establishing a foothold in Archangel, Revelations takes place right where its predecessor ended. Uriel, his half-demon friend Shandra, and a host of other angels try to capitalize on their victory by marching an army towards the demon prince, Abaddon.

The books are very much dark fantasy and Revelations in particular has a lot of action scenes. One thing I wanted to really push in Revelations, considering this is a series about angels and demons, is questioning and doubting of faith. That’s the main theme behind Revelations and most of Shadow’s Advent, but I can’t say too much without some potential spoilers!

I wasn’t raised religiously, but I always found religion fascinating. There is so much lore, research and writing when it comes to the characters—angels, demons, half-demons, etc.—of religions. And I’ve always enjoyed a good vs. evil story, so I asked myself what would happen if evil won and we picked that up ten years later? How different would the world look? How would the characters of these angels change after being trapped on a demon-run Earth for a decade?

I don’t have books out in more than one genre, but I definitely write in more than one. While Shadow’s Advent is a dark fantasy series, I also write a series of short stories called Nightshade. Those are urban fantasy stories about a woman who hunts monsters for a living, but she herself is a monster that can’t die. The real issue is that no one knows exactly what she is, so it pushes her away from those that normally hunt things like her. Right now, Nightshade is being released for my patrons on Patreon.

I’m also planning a non-Shadow’s Advent book for next year. It will be a near-future climate sci-fi and, true to my dark fantasy background, will be pretty bleak (but hopefully ultimately inspiring). I’m also in the very, very early stages of planning a horror novel!

I think every story is worthy of attention if it’s a story that entertains you. If it manages to suck you in, make your heart race and make you feel strong emotions (positive and negative), then it’s worthwhile. When I write, that kind of entertaining is exactly what I aim to do.

In some of the feedback I got for Revelations, I had a beta reader tell me they were so shaken by a character’s death that they had to put the book down for a little bit. It’s that kind of reaction, that powerful feeling, that I really hope to convey through my writing.

Aside from inspiration drawn from devouring books, shows, movies, etc. since I was young, I can’t say much. I know a lot of people say that art comes from pain, and I know some of the best literary works do. I’m fortunate enough to not have some kind of severe trauma or lifechanging event in my past that influences what I write.

I think it’s my personality though, that desire to make people feel good, to laugh or get taken away to a different place (especially with all that’s going on) that influences my writing.

I’m a huge nerd. If you follow me on social or meet me in real life, prepare to be cooler than me. 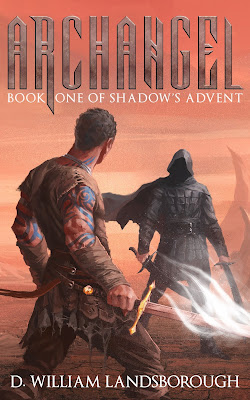 I am a huge Adam Nevill fan. I know he’s gaining popularity here in North America more and more—my favourite book of his, The Ritual, was turned into a movie on Netflix—but he has some genuinely creepy stuff. Sometimes his level of detail is too much for my taste, but his books never fail to give me nightmares.

Well right now I have to say Archangel, Book One of Shadow’s Advent. Come December, I would say Revelations... but you have to read Archangel before you can read that!

Archangel had been a backburner project for me for years. I would ebb and flow when it came to working on it. Then, in August of 2018, I decided to quit my bank job and go back to school for marketing and communications. This decision was purely driven by a mental health crisis and a genuine unhappiness with my job, so I took the risk and quit it, relying on freelancing and savings (and student loans) to get me through a one-year program. During that time, I also decided that making a jump into what I really wanted to do meant getting Archangel out there.

If I hadn’t left my job at the bank, if I hadn’t chosen to go after what I really wanted, I don’t know if Archangel would have ever come out or if I would be on the verge of releasing my second book.

I wish people would ask more about independent publishing (aka self-publishing). There is still a stigma attached to indie authors, one that stops people from even picking up a book if it isn’t from a big publisher. And I get that mindset, and I understand the pros and cons to both sides. But indie authors are essentially (and for tax reasons, usually) their own business. They are entrepreneurs. And if you ask any of us about the process of being an indie author, the enthusiasm will be overwhelming!

It’s not a catch-phrase or a quote I can attribute to any person in particular, but I always tell people “don’t be embarrassed about your dreams.” 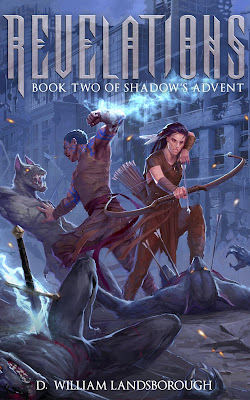 It might sound silly reading that out loud, but there are so many people who are embarrassed to admit they want to be a writer, a painter, a musician, or anything that channels your passion. Hell, I used to be one of those people. Archangel, when I was writing it, was only known to a few people who I knew wouldn’t judge me. But, looking back, what would I be judged for?

I absolutely love how many of my friends, family or even strangers have approached me since Archangel’s release to tell me how they want to write a story they’ve been thinking of or how they want to try their hand at photography or making music. I tell them to go for it. It might just be on weekends or in the evenings at first, but you can do it.

Thanks to William for participating in the interview.

In my own writing, I'm making some minor typographical corrections to Threading the Rude Eye and preparing to give Promise of Carnage and Flame the final review before it hits the big river store in ebook with the paperback to follow.

As part of my self-reward for completing Promise of Carnage and Flame, I got these: 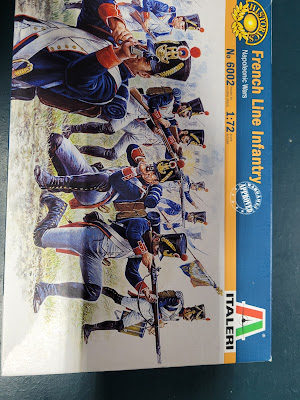 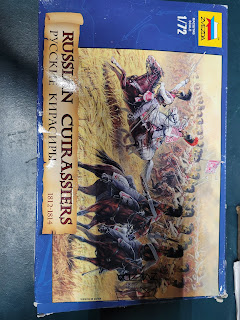 I also had a battle of Vauchamps. Here's a picture of French cuirassiers about to destroy a Prussian infantry brigade. The picture summarizes a lot of things: 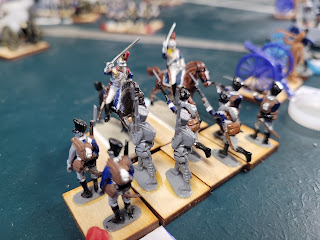 For anyone who cares, I use the Song of Drums and Shakos Large Battles rules -- upscaled for real battles that involve corps and armies -- with basing from Age of Eagles (except, using the 1/72 scale figures, I only get two infantry per base, and one cavalry figure per base. Also, my infantry brigades consist of four bases, and my cavalry brigades of two bases--because I want to play big battles, but I don't want to go bankrupt buying figures, and I don't want to re-base ever again. You may notice some figures aren't painted and I haven't fancified the bases. We'll see if that every happens. I did write an after action report for the battle, but I've found a different rendition of the same battle that I want to try--and I messed up the initial setup when I played on this first one. The short version of the report is that that the Prussians held off the French quite well (perhaps because I had placed more Prussians on the board than had actually arrived historically at the start time) until the French cavalry arrived on the flank and smote them hip and thigh, fetlock and forelock. The Prussian heavy cavalry had a great chance to destroy a French infantry brigade, but the French foot soldiers held, which allowed some French cavalry to catch the Prussian heavies in a weakened state, demolishing the Prussian horse brigade as a fighting unit. I played after the Prussians had reached the break point to see how well Blucher would do in getting his troops away from the pursuit. The Prussian general salvaged some, but it was a rather bad day for Marschall Vorwarts.

I did get some great responses from readers of my latest newsletter. If you want to know what provoked the most feedback that I've had so far, you'll have to sign up for my newsletter here.