It was a Saturday, a day like any other day. I was in a small town, and the boys had come to play. It was my destiny. It's what we needed to do. They were telling me. I'm telling you.*

The Corsican Brothers came. They came to play. We led off with HeroQuest, which my wife had purchased for our family back in the early 90's, I guess. They were actually anxious to play what we've come to call Our Custom Game, but I persuaded them to try this game first to expose them to a new game system. 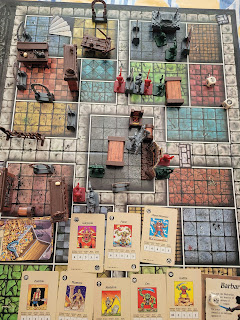 The thing about playing with the Corsican Brothers, is that there is an actual playing time of about 15-20 minutes for every 2 hours dedicated to the proposition. It all begins with a brief explanation of the rules. Of course, that brief explanation is expanded into a lengthy discussion about various aspects of play and the rules because: "Why?" Moss was particularly interested in the spells used in the game and why the wizard got three sets and the elf only got one set, and how they worked. He was particularly taken by one which allowed a person to pass through solid rock and another that allowed one to become mist and pass through enemies. We burned a lot of time throughout the session as he returned to question how that would work and why one would be trapped forever if he ended his move inside solid rock.
Anyway, you may be able to glean a bit of their style of play from the photo of game board above. After carefully explaining that they had the greatest chance of success if they stayed together to help each other against the potential opponents, they immediately split the party. They opted to go about opening as many doors as they could find. If you look closely at the board, noting that their characters are the red figures, you can see that they are spread out and are all being attacked by bad guys. The big bad boss of the dungeon level has also been discovered. Now he can chase down the scattered adventurers and kill them individually.
They did not get to taste the bitter fruit of their strategy because the ladies returned from doing their errands and such, and we had to put it away.
Their time with HeroQuest did bear fruit later when they came back for dinner and birthday cake. After the dinner, Roy drafted me into a game of chess. Following the clash on the checkered arena, in which it was determined that two knights and a rook were sufficient to topple a king, they insisted on playing Our Custom Game.
They took complete control in setting up the game, finding and placing monsters and men, and writing notes for the movement, combat, and other abilities of the pieces involved. Thus continued the adventures of Darth Vader and Eldon Zyrax or Eldon Zyron (I can't remember the name exactly). The two adventurers joined the longrad, the golden turtle, the black leeches, the Alien Scouts, the goblins, the trans, the Healer, the CPUs, the biome, and the building that might-or-might-not-be solid rock.
Did you catch that last one? You may be able to guess who wanted to incorporate the spells from HeroQuest into Our Custom Game. He knew what he wanted and pursued it. One of the Alien Scouts had the water spells. Moss made a beeline for that enemy and successfully resisted a sleep spell to slay the guy and pry the magic spells from his cold dead hands. 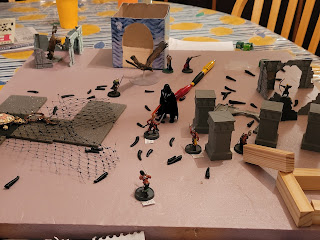 The picture here is how things looked when it was time for them to go. We always leave the game setup so that we can resume it when they next return.
Eventually, I'll let them see the D&D books; the Monster Manual will have them ecstatic.

*Yes. It's a song reference twisted to my own purposes. See Foreigner--"Long, Long Way from Home," first verse.

Those of you who subscribe to the newsletter know I that I attended a funeral this week (Oops, I guess you don't. Even though I've written the newsletter, it doesn't go out for a few more days). My biggest fan wants me to include a character based on the dearly departed in a sequel to The Shrinking Zone. Of course, that's a fabulous idea, and one that I anticipated he would suggest. We shall see.