I spent part of yesterday extinguishing holiday cheer. The prevailing mood was frigid. With the landscape cloaked in icy white, and the temperature restrained to the single digits, I soon discovered that my worn, leather work gloves were woefully insufficient protection. After going back inside to warm my hands, and putting my cheap stretchy gloves inside the leather ones, I leaped into the action once more.

It was lonely work all by myself, but I shrank not from the fray. I threw the scaling ladder next to the chateau walls and ascended to sack and pillage according to my whim. I spared not a single string of Christmas cheer, dragging them from the stronghold and binding them deftly (or with the meanest of skill as the case may be). The lights in the trees, like guerrilla bands in their mountain haunts, resisted in a most determined fashion, but my superior strength, mental acuity, and tactical brilliance eventually prevailed. There are very few inanimate objects that can defeat me in a straight-up battle of wits. 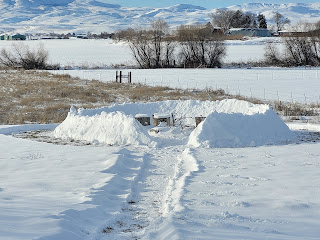 Earlier in the week, while shoveling snow, I formed a rudimentary fort around the fire pit. It stands forlorn and unused as everyone else maintains that the weather is too cold to loiter about a fire outside.

Last night, there were a hundred or so elk in a field that is off to the left in the snow fort picture. I didn't get a picture of that.

Before I share a book review, I must report the surprise that I got today. My biggest fan caught me to tell me that he read my latest book, The Shrinking Zone, and he loved it. He then proceeded to tell me how he would slay red-eyes. Of course, I told him at the time I was writing it that he would like it. I'm not surprised that he read and loved it. I'm surprised that he had obtained a paperback already -- he received it for Christmas. I'm still waiting for my author copy paperbacks to arrive.

As for the book review: 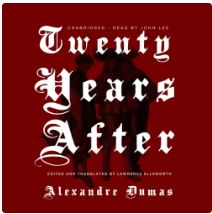 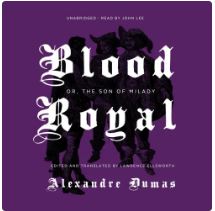 I finished the last of these (except for a half-hour remaining) while taking down the lights yesterday. These two books are actually one book that has been divided into to 2 audio books on Chirpbooks from Dumas' sequel to The Three Musketeers. Twenty Years After is over 13 hours long, and Blood Royal is nearly fifteen hours long. I acquired them for $2.99 or maybe $4.99 each, although I believe they are both back up to their regular price of $20 or more. The books are read by John Lee who does an absolutely fabulous job.

As the more perceptive may glean from the title, the story begins 20 years after the conclusion of The Three Musketeers. D'Artagnan is still a lieutenant of musketeers. Athos is a retired country gentleman, Aramis is an abbot. Porthos is also a retired country gentleman. The four friends find themselves on opposite sides in a political dispute that threatens to break out into civil war. They cannot prevail against one another. Only when they combine their talents do they find success--and even that has limits. Milady's son Mordaunt is the major antagonist in the story. Mazarin, the Prime Minister of France, is the secondary villain. The heroes travel from Paris and about France to England, Scotland, London, and back to France again. The story drags in places where the political intrigue among the secondary characters takes center stage. However, as a whole, the story demonstrates Dumas' expertise in weaving a compelling tale of fiction with historical events. D'Artagnan and Porthos continue to be highly satisfying and likeable characters in my opinion. I found Athos and Aramis, particularly Athos, to be less satisfying. Athos grows less mysterious, and Aramis continues to become more mysterious. If I remember correctly from my reading of the final book, Le Vicomte de Bragelonne, Aramis is the only one of the four heroes whose death is not finally revealed.

In summary--This was a fantastic translation and reading of Dumas' work.

In my own writing, I'm still wrestling with a short story that I need to submit before the month is over. That's all I've got to say about that. 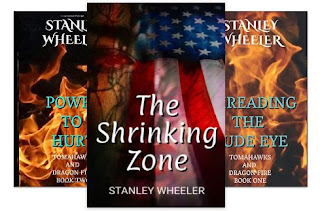