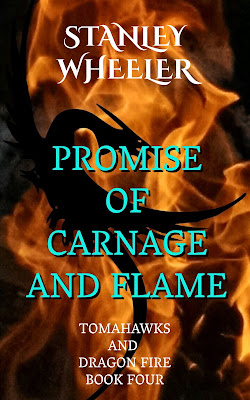 Yes! Book Four in the series is ready for purchase! Click this link to get it.

I had a great time writing this book. A few chapters in, a can of awesome exploded like a dozen eggs in the microwave, splattering the entire story with stupendous possibilities. Naturally, I scrapped the rough outline in favor of the new found fabulosity. (I know that's not a word, but it makes the sentence sing like a rockstar Dean Martin and Nat King Cole, or maybe it's Martin and Lewis).

Two of the supporting players from the previous books get a big share of the spotlight in book four. Both of these characters become richer and deeper. Additionally, a few new characters may be more important than they appear. Finally, more dragons rage against the cause of liberty--hence the carnage and flame promise, but that doesn't all come from the dragons. Prepare to be surprised.

I'm looking for reviews, so the price is currently only 99 cents.

Some thoughts about some different books:

I've had this book, which I'm not going to name, in my e-library for a few years but hadn't got around to reading it. I had picked it up for free (a habit I have). I finally read it. I found it pretty good until the last 20% when it went completely off the rails. It was a murder mystery with an ex-cop running a record store as the primary character. The end reveal of the murderer was so bizarre that I thought it might be a dream sequence--but it wasn't. It felt like there should've been another 10 or 20 pages of story to unravel the mystery, but instead the author opted for a weird reveal scene and info dump by way of conversation to conclude it. Don't even get me started on the romantic interest that seemed like it had been wedged into the story as an afterthought, or an editor's suggestion. I'll stop my criticism there because if the book had been bad all the way through, I wouldn't have been so disappointed. If the author had nailed the ending, I might have come away thinking that it was a great book. Instead the award-winning author totally goofed it, in my opinion, and left me feeling like I had found a dead mouse in my dessert.

I also finished The Coming Race by Edward Bulwer Lytton.

As you might suppose, I also got it for free. Unfortunately, the story was thin while the descriptions of the religion, politics, philosophy, technology, and a multitude of other details filled the rest. Reading it reminded me of some other story from a book or television -- but I can't remember what it was now. I cannot recommend the book.

I've started into Michael Moorcock's The Ice Schooner and have to admit that I like it, so far. I'm only thirty pages or so into it. It's quite different from the Elric of Melnibone -- which I couldn't bring myself to finish.

The weekend was a mixed bag. Friday was great. I went fishing with the musketeer and El Supremo and caught a record number of bass--record for me anyway. Those guys would have been happy to go home an hour earlier, but they stayed to humor me as I was having a good time catching the first, the most, and the last fish. They did finally switch their jigs (or jig trailers, or jig covers (I'm not sure what they're called) to match mine and they started catching as well, or almost as well.

Saturday was a bust. I had two major things to accomplish at home. I spent all my time on the first one, and couldn't figure it out. I wasted a lot of effort and a lot of time.

Now I'm looking forward to getting Promise of Carnage and Flame formatted for paperback. As soon as that's done, I'll get to work on my dystopian thriller.