I've played this scenario before. It's the first of the dozen or so scenarios I've created for my skirmish rules. Since I've made some fundamental changes to the method of resolving combat and other things, I figured that I should try it out on the first scenario. So once again, it is the rescue from the hangman's noose. Andre, D'Hubert, Arnaud, and Paul are musketeers on a mission to rescue a friend from the Cardinal's Guards and the hangman's noose. The musketeers are in blue. The guards are in red. The white circles mark the location of objects hidden to help the musketeers. The guards can't take any action, other than looking for the musketeers in the crowd, until they spot the musketeers or the rescuers do something to draw attention to themselves. I've dispensed with the crowd for simplicity's sake for this test. The hangman is played by a partially painted Planchet figure. The friend to be saved from hanging is played by a woodland Indian figure.

Here is the initial setup: 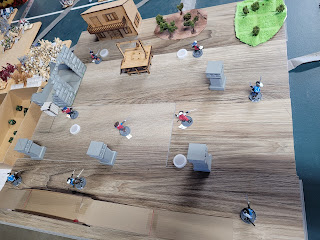 Ignore those Allied troops in the background at the upper left waiting to enter the battle of Leipzig. The musketeers moved first. D'Hubert went for the prisoner while the others went for the hidden objects. 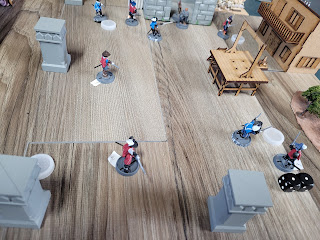 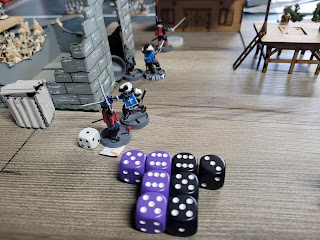 Arnaud found an item, a cage of pigeons which flew up and distracted the nearby guards. With D'Hubert blocking the hangman from getting to the scaffold, Arnaud opens the festivities with a the caress of steel to a distracted guard. (The guards have names, but I can't remember them). He nearly killed the guard, but only ended up wounding him, and getting between him and the prisoner and the scaffold. 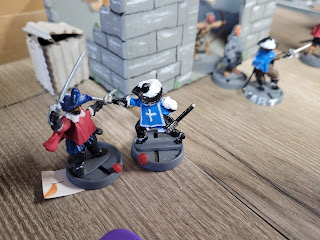 Unfortunately for Arnaud, the chickens (or in this case, the steel) soon came home to roost. The guard wounded him. Arnaud reacted with an attack of his own, only to have the guard run him through. Scratch one musketeer. 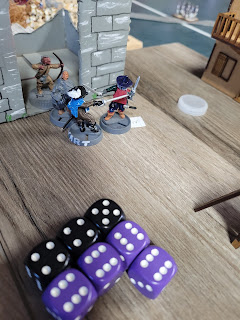 In an attempt to relieve the hangman, so that he could in fact hang a man, a guard rushed to attack D'Hubert. The musketeer received the attack with aplomb, and more importantly, with a sword, which he put through the guard's enthusiasm, and heart. 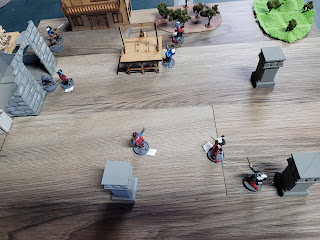 D'Hubert in the upper left corner attempts to make his way to safety with the prisoner, after knocking down the hangman. Paul and a guard at the top of the picture have measured their steel with one another. The guard was wounded. Both of them saw that the key to the situation lay with D'Hubert and the prisoner. Both attempted to make their way to hinder or help the musketeer. Paul hoped to avoid going around the scaffold by leaping upon it, but did not have enough umph to make the jump. Meanwhile, Andre and a guard at the lower right have engaged and disengaged. Andre has found an extra knife that was hidden for him. The other guard near the center has had trouble accomplishing anything. 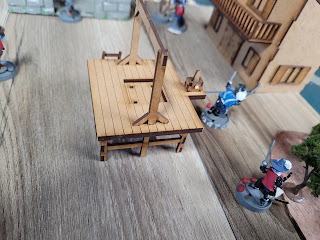 Paul met the guard's attack, giving him another wound, and squeezing between him and the scaffold to head toward D'Hubert who has been set upon by a guard. The guard determined that his wounds required attention and that he could not stay for the remainder of the show. 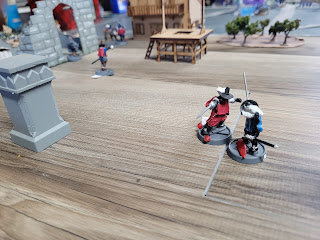 Above, Andre and a guard continue to fence. Andre has twice wounded the guard, but the Cardinal's man refuses to let the musketeer pass. 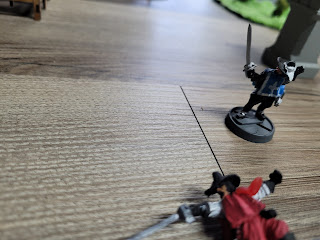 Andre finally breaks away. The guard moves to re-engage, but Andre counters with the old knife to guard's level three, or liver, as the case may be (you didn't think I would miss a chance to insert an obscure ST reference?), and the guard falls--but he still isn't dead. 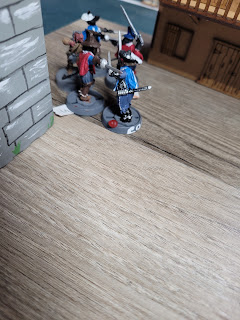 In the upper left corner where the prisoner and D'Hubert are about to escape, Paul has made it to the fray along with two guards. Paul introduces his sword to a guard who is terminally pleased to meet it. The other guard, seeing his companion fall, elects to breakaway from the combat to reconsider his priorities. He takes a wound from D'Hubert as he flees. The guard runs, but not far. 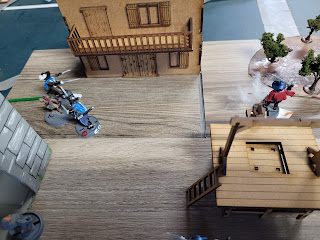 Before D'Hubert and the prisoner can escape to terminate the encounter, the cowardly guard decides that he can be brave at a distance. He fires his pistol, killing Paul. D'Hubert completes the mission. Although Andre and D'Hubert escaped unscathed, two of the four musketeers breathed their last in that town square. Two of the five guards were slain. A third guard fled the field before the final scene.

Overall, it played very well. I like the new changes, with one exception: I left something out of the ranged combat rules, which makes the target unreasonably vulnerable.