Fun Fact: Let us cast a glance, or un coup d'oeil, at the French for this bit of history. In 1830, Charles X, King of France, issued the Four Ordinances of St. Cloud. Apparently the king felt that the elected government was too radical (and he had no desire to serve as a mere constitutional monarch, considering the kingship his birthright by divine right and all). These ordinances abolished freedom of the press, dissolved the newly elected Chamber of Deputies (the lower house of the French parliament which contained a majority elected in opposition to the king's policies), reduced the future number of deputies, curtailed the powers of the deputies, and disfranchised a huge portion of the electorate. You might think that such steps would be ill-advised in a nation that had already demonstrated a willingness ride the regicide railway to the bloody end. You would be right.

If Charles X considered the citizens revolting before he issued the ordinances, he gained new insights with regard to that opinion almost immediately. The citizens were revolting, and they did. The disfranchised businessmen refused to lend money and closed their factories. The workers now had nothing better to do than to protest (what with the lack of bowling alleys and movie theaters at the time). The newspapers refused to be silenced. The police and military patrolled Paris to maintain order.

The fighting began on the evening of July 27. The fighting continued on the 28th to shouts of "down with the Bourbons," and "to the guillotine." (I don't think the latter phrase was meant as a toast). Charles at St. Cloud ordered Marechal Marmont (who had betrayed Napoleon in 1814) to quell the riot. Marmont, after taking in the situation and demonstrating himself to be the indecisive worm that he was, sent back a note to the king informing him that he no longer faced a riot, but a revolution. Marmont waited for immediate orders, lest delay result in a change of regime. Charles turned to his adviser Jules de Polignac. This minister, having been part Four Ordinances, told the king to double down and to resist rather than compromise. I don't see that the king ever provided Marmont with more specific orders.

By July 29th the populace had acquired weapons from the arms depots and gunpowder factories. They had erected barricades throughout Paris. The tricolor waved from many buildings. Marmont remained inert, failing to call in additional troops. He further handicapped his troops by ordering them not to fire unless fired upon. The populace took the Louvre, the Tuilleries Palace, and the Hotel de Ville. The politicians began the work of establishing a provisional government. Thus completed the second revolution against the Bourbon monarchy. Charles fled to England.

Unable to get out of a familiar rut, the French established a constitutional monarchy and placed Charles' 5th cousin Louis Phillipe, another Bourbon, on the throne. This monarchy would last until 1848 with the birth of the 2nd French Republic.

As long as I'm rolling here: The fall of King Louis Phillipe in 1848 does illustrate some germane points. By 1848, most of the populace could not vote and a third of Paris was on social welfare. Frederic Bastiat argued that political corruption, a complex system of permits, monopolies, and bureaucracy led to the revolt against Louis Phillipe. Political favors and protectionism allowed the privileged to dictate market conditions which resulted in the destruction or bankruptcy of many businesses. Bastiat reported that the French law makers were entirely unaware of the consequences of their radical policies. These factors caused the rise of the socialists and anarchists, and eventually another revolution.

With political gatherings banned, those in opposition to the government held fundraising banquets. These were subsequently banned in February 1848. The Parisians reacted in the usual way with their anger directed at the king. With the torches and pitchforks converging on the palace, Louis Phillipe abdicated on February 24 and fled to England. By this point, there must be more Bourbons and their spawn in England than in France.

The new republic struggled as its incompatible aims were reduced taxes and greater social benefits. The republic established a work program building roads, planting trees and such, and taxed land to pay the workers. The small land owners and rural peasants could not or would not pay the tax. Turmoil, riots, and armed suppression of factions followed until the election of Louis-Napoleon Bonaparte in December.*

But enough revolution. I believe France is in its 5th republic which dates from 1958 and which may soon be its most long-lived republic. It's like they turn out republics like crepes. 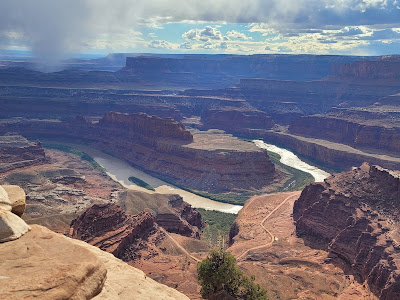 Dead Horse Point, twenty-some miles out of Moab Utah. I was there for the third time last week. To clarify: I was only there once last week, but it was the third time that I had ever been there. It was part of a fabulous trip about southern Utah which prevented me from writing. I did however see some sights, visit the college kid, play cribbage with my root and branch, and drive a couple thousand miles. I am back home with my nose to the keyboard, having spewed words to the digital page like half-digested midway snacks on the tilt-a-whirl. I've probably used that simile before, but I still like it.

I have to be honest. As I hit the final third of the dystopian novel, I'm looking forward to slipping back into the Tomahawks and Dragon Fire series in the midst of exciting times in the American Revolutionary War. There I go, back to revolutions. They may not be fun to live through, but they can be fun to write about.

*Most of the above was condensed from various wikipedia articles about the subjects.