For a ration of pure fun, I recommend this book 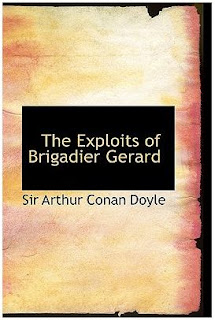 The Exploits of Brigadier Gerard by Sir Arthur Conan Doyle is a compilation of stories told by the fictional narrator, Etienne Gerard, of his adventures in Napoleon's Conflans Hussars. Gerard tells the stories in his old age, and humility has not dimmed the recollection of his fantastic exploits in the service of the Emperor. I suppose action adventure comedy would be the proper term to apply to the compilation. Much of the comedy arises from the narrator's bravado and false sense of modesty.

The actions here are not the great deeds in the big battles of the era, but brave and gallant adventures, missions for the Emperor that occur on the fringes of the historic events. A few of the stories are remarkably similar to the adventures of Bernard Cornwell's Richard Sharpe character. By following a French hero, Doyle lets the reader romp about Europe instead of being confined to the peninsula. We see Gerard not only in Spain and England, but also in the east fighting Cossacks and outwitting his Prussian counterparts, carrying messages and state secrets through enemy troops, and charming women along the way. Although he is always brave and resourceful, he is not always entirely successful.

Gerard is hilariously unaware of his own vanity. These two quotes illustrate the conceit of the brave Gerard:

"It is true that I have had to depict myself sometimes as brave, sometimes as full of resource, always as interesting; but, then, it really was so, and I had to take the facts as I found them."

"I am an excellent soldier. I do not say this because I am prejudiced in my own favour, but because I really am so."

Those who fail to see the humor may find the narrator's conceit too much, but I think Doyle struck the perfect chord with this character. I find Gerard more entertaining that Sherlock Holmes. You will not see great depth of character or detailed descriptions in these stories. You will find exciting adventure and amazing exploits told with the skill of Sir Arthur Conan Doyle projected through the lens of the British military ideal as well as the stereotypical concept of French bravado, elan--and conceit.