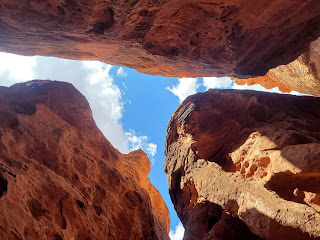 I've missed a couple weeks - but with good reason. We were having a hot time in the old town. The old town was in another Washington County, but not my Washington County. The temperature there rose quickly to 106 degrees and stuck there like the needle of the fuel gauge on the old Dodge Dart. Pardon me while I digress. After some driving, the needle on that fuel gauge would drop from full, or from whatever level I had filled it in the usual manner until it reached a quarter tank. It would remain at a quarter tank as long as I kept driving. I knew that the next time I drove it, I could go anywhere, but then I would have to gas up after the trip. I could go anywhere on a quarter tank: One trip to school and back, a trip to Caldwell and back, wherever. It didn't matter how far I went. The needle would stay at a quarter tank until I returned, at which point it would measure empty--there was no in between, no 1/8th of a tank, no almost empty. It went from a quarter tank straight to empty. The car would go anywhere within the realm of my travels, near or far, on a quarter tank.

Back to my point -- it was hot. It was hot every day until the day of our return. Then it rained. The temperature over the pavement was 111 degrees, according to the information provided by my car. 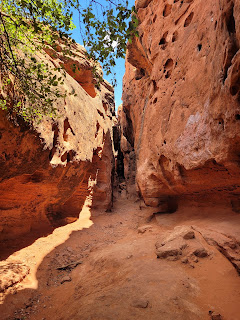 We walked all over the college campus and made multiple trips to mega mart as well as Smith's. I hadn't been in a Smith's for years, as they had all pulled out of Idaho well before the turn of the century. The motel represented that it had breakfast for us. It did not. Stale madeleines in plastic wrappers and old, brown bananas do not a breakfast make.

We did find some good places to eat. A place called Capeletti's Restaurant turned us away one night. By which I mean that we hadn't made a reservation and there was a 25 minute wait--and I know that 25 minutes really means at least 40 minutes. So we made a reservation for the following night. I recommend the Caprese Bruschetta. The bone-in pork chop came with real mashed potatoes, delicious squash, onions, and some other sauteed vegetable that I can't recall. The chop itself filled most of the plate and slanted like Vasquez Rocks from atop the mound of mashed potatoes to the edge of the plate. I would certainly have it again. 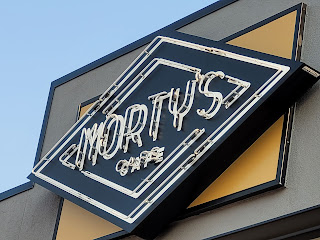 If you prefer your meat ground and nestled within a bun among tasty sauce and toppings, I direct you to Morty's Cafe. Morty's specialized in hamburgers. Wife and daughter had the Iconic burger. I had the Hawaiian burger. Certainly among the best burgers I've ever had. Juicy and delicious. I would like to go there again.

In addition to eating and going from campus to stores and back again, we enjoyed the park on the bluff overlooking the town. The pictures above are from the Narrows and the picture below is the Arch. 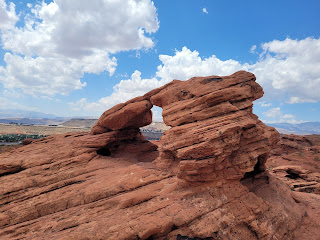 The Arch is small. It's a very short hike up to the right and above the Narrows. The journey to the Narrows is more of a short walk, and the rock formation squeezes together such that it would be difficult for even a starving child to make the full passage through and up the stairway of broken rock.

We visited Brigham Young's winter home and took the 25 minute tour. Our guide was a gentleman from Rigby, Idaho who had moved south to retire.

Perhaps the best part of the stay was the trip to the visitor's center. The temple renovation won't be complete until next year. We met a wonderful sister missionary from Rigby, Idaho who has only been out for a month. She explained the role of the cannon in building the temple and how the lightning strike on the anniversary of Brigham Young's death resulted in the change he had directed for the temple's cupola. She also directed us to some touching videos about some missionaries who had been featured on the show The District. That proved to be a great way to cap our visit to the domain of saints, students, and sunshine.

I also completed a re-read of Warlord of Mars by Edgar Rice Burroughs. I should do a full review on it later.